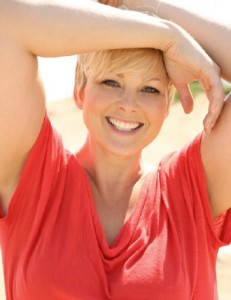 Since the age of five I’ve had the modeling bug. My mom and I used to do mom and daughter shows at luncheons and at private retailers in our town of 27,000 people.

I started up again at 13 years old when I took a modeling class (not recommended, but I didn’t know any better). The class offered more of the stand straight, walk with a book on your head, some makeup lessons and mirror work. The technique of mirror work stuck with me and I practice it even today. It consists of sitting in front of a mirror, and making faces at yourself. Smiling, frowning, squinting, seducing, etc. and learning how your face feels while you are doing those expressions. This technique then allows you to recreate those expressions while facing a camera because you now know how it feels to smile and what your face is doing when you do smile, and any adjustments that need to be made can be worked on.

My first job through this modeling school was as a clown at a town fair. Not the type of modeling I wanted to do so, I stopped going to the school and did occasional work at the local mall in runway shows, getting paid in discounts at the stores we modeled for. I also did school shows and some local community college shows while still in high school. Now that I think about it, I never realized how much modeling I did before I actually became a “model.” Anyway, during this period of sporadic modeling, I was a jock. I played both basketball and volleyball, and played through until graduation. My mom was recently joking with me how in high school, I would never wear a dress or makeup, and now look at me! 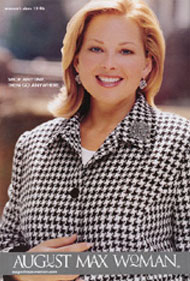 After high school I became a Rotary Exchange student in Sweden for one year starting August ’91 to June ’92. When I came home to Canada, it was time for university, but I didn’t apply early enough for fulltime studies so I took two courses part time and worked two jobs on the side. It was then that people started coming to me and telling me that I should model. I was a size 14 at the time, so I went to a local agency and they told me that there was no room for a model my size (in 1992 plus-size models were much larger) The director of the agency explained that if I wanted to model I needed to get to at least an 8 or gain up to a 16. At the age of 20, I didn’t have the self-esteem to gain weight nor did I have the patience to lose weight, especially being in school and working two jobs. She suggested that I do a test to see how I photograph, and learned that I was what the industry calls photogenic. Now I had photos but had no clue where to go with them.

My friends laughed at me when I said I was going to be a model. Even to this day they bring up how they never thought I’d make it, and look at me now! After that year at University, I moved to Toronto, and took a course at a Trade School. While working towards my diploma, my mom came across an agency called Plus Figure Models, ran by Jacqueline Hope owner of Big Bold and Beautiful Clothing. I had gone to different agencies over that year and heard the same thing: no room for a size 14. I called up Plus Figures and made an appointment to come to their open call. They asked me to stay afterwards and offered me a contract. I was 21 years at the time so I took the contract home to my mom to have her look it over. When we both went in to get answers to some questions they met my mom, and offered her a contract too! 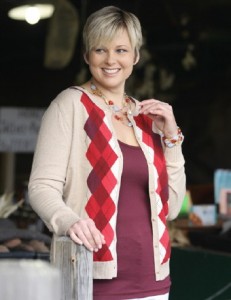 I spent three years in Toronto modeling for Sears, Eaton’s, and The Bay department stores and did frequent runway shows for stores like Tony Plus, Cotton Ginny, and Danier Leather. I also made appearances on local TV talk shows. After modeling in Toronto for a while, my agent made arrangements for me to meet with agents in NY and Chicago. After a very unsuccessful trip to NY, I went to Chicago and met with Loretta at Elite who offered me a contract. I was the happiest girl in the world! I was an Elite Model. I couldn’t believe it! My dream had literally come true. My family had concerns, and I had concerns. I was afraid to fail. I had friends in Toronto, a job, and my family. At that point, a really good friend of mine gave me advice that I have never forgotten “Tracie, if you go to Chicago, try modeling and it doesn’t work out, at least you tried. Failure would be not trying at all.” That was it. I moved.

In 1996 I became a permanent fixture at Elite Chicago. After being there a week, I got a packaging job for a bra company, and made an appearance on the Oprah show doing a Seventeen magazine fashion show. I guess I made the right decision. I spent three years in Chicago where I signed with other agencies including Ford LA and NY, Campbell in Dallas, Elite Atlanta, Mitchell in San Francisco, Louisa Models in Germany, and Irene Marie in Miami which I signed with in 1997. I left IM to join Elite Miami in 2002. My client list has included Sears, Target, Macy’s both East and West, Jacobsons, Dillards, Montgomery Wards, Meijer, Junonia, Ulla Popken both Germany and USA, JC Penny, Quelle Germany, Cato, August Max Woman, Cotton Ginny Canada, Sears Canada, Glamour Magazine, Deco Drive Model Citizen Interview, as well as other appearances on TV talk shows doing runway. 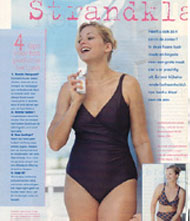 How has the plus-size modeling industry changed since you first started out as a plus-size model?
When I first started modeling, in 1994, I started in Canada where it was a regular thing to see a plus model in fashion shows, on talk shows (in Canada) and in catalogues. After working in Toronto for three years, I built a portfolio that was good enough to start looking around in the States for representation. I signed with Elite Chicago in 1995 and once relocating to Chicago in ’96 I really learned what modeling was like, clients paid for airfare, they fed you on set, they paid for hotels and they paid you in American money, this was a great thing.

The main thing I have noticed about the changes is that when I first started there wasn’t room for ‘Super’ models in the plus world. We weren’t considered ‘real’ models, even to this day there are photographers who won’t shoot us because they carry that same attitude, but, today, clients are recognizing that there are models, both plus and straight that can carry a product equally, there doesn’t need to be sizeism, beautiful is beautiful. The fact that Vogue has put an editorial layout with Kate Dillon and Glamour has done a cover with Phillipa has proven that Plus models are more than a novelty, we are now closer to being considered equal to our thin counterparts. 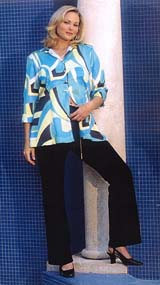 Are clients abroad much different from American clients in terms of what they are looking for in a model?
I find that each country has what works for them. Germans will use models from a size 8 to a 12/14. Italians, a size 12 to 16, English clients will use 12/14 girls, American clients also tend to vary on what sizes they use. There are specific clients that will only use size 16 girls, some Americans prefer 14s, and then there are some that will book a 10/12 girl and pad her up.

I find that clients want a girl who is beautiful, is easy to work with, professional, and also a girl that sells their clothes, and sometimes if those qualities are in a size 10 girl, those size 16 clients will sacrifice the size to get a girl who can sell. Lingerie clients prefer a girl who is fit, in other words, toned body, low cellulite and proportioned, it doesn’t matter the size, except for of course they need to fit the bras.

What do you think your clients love most about you?
I hear alot of “You have a great smile” from clients. Honestly, I am a professional. I always show up on time, I do my job, I take it seriously. My nails are always freshly manicured before any job, my feet exfoliated, I’m always lingerie ready (even if the client doesn’t ask specifically), I find out what the client wants and do my best to give it to them. So to answer your questions, I’d like to believe that clients hire me based on my work reputation and not just my looks, I believe they go hand in hand. 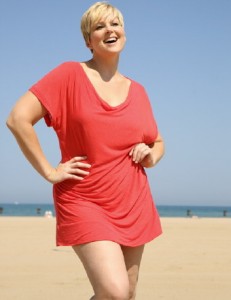 How can you tell when your agency is working for you and when it isn’t?
If you feel that your agency isn’t working for you, first talk to them, find out if maybe your card isn’t getting a good response, or find out what response the agents are getting from clients. The only way to fix a problem is to know what it is. If the agency isn’t too responsive to your request, start looking around at other agents. You don’t need to sign anything. You can meet with them, no obligation and find out what other people would do to market you.

Knowledge is power, the more info you gather the stronger you will be. So, talk, quietly, but talk. It’s your career, your car payment, your groceries, your daughters schooling, that’s what you are responsible for, so you need to know what is going on. It’s business and first lesson in modeling…….THE AGENT WORKS FOR YOU.

I got a “Just My Size” catalog in the mail recently and I think I saw you. Was that you?
It’s quite possible that it was me, I’m not sure though. I sometimes shoot for ad agencies who are hired by a company to organize their shoot. So I don’t always know where the photos are going to be used until I see them somewhere or someone tells me I am in a certain catalogue. So, if you think it’s me, it probably is, I’d be interested to see the photos though. It’s nice to know that there are people who recognize me and actually know my name.

Any advice to girls in the business?
1. Remember, the agent works for you, not the other way around.
2. Take things into your own hands, have an active interest in your career, know who they are telling about you and what the feedback is.
3. If you aren’t comfortable with a job it’s okay to say so.
4. Don’t take anything personal. Remember, you are a product not a person to clients, your personality is a bonus, but your presence is what will get you the job, your personality will keep it.

Tracie can be booked through Heffner Mgmt – info@heffnermanagement.com